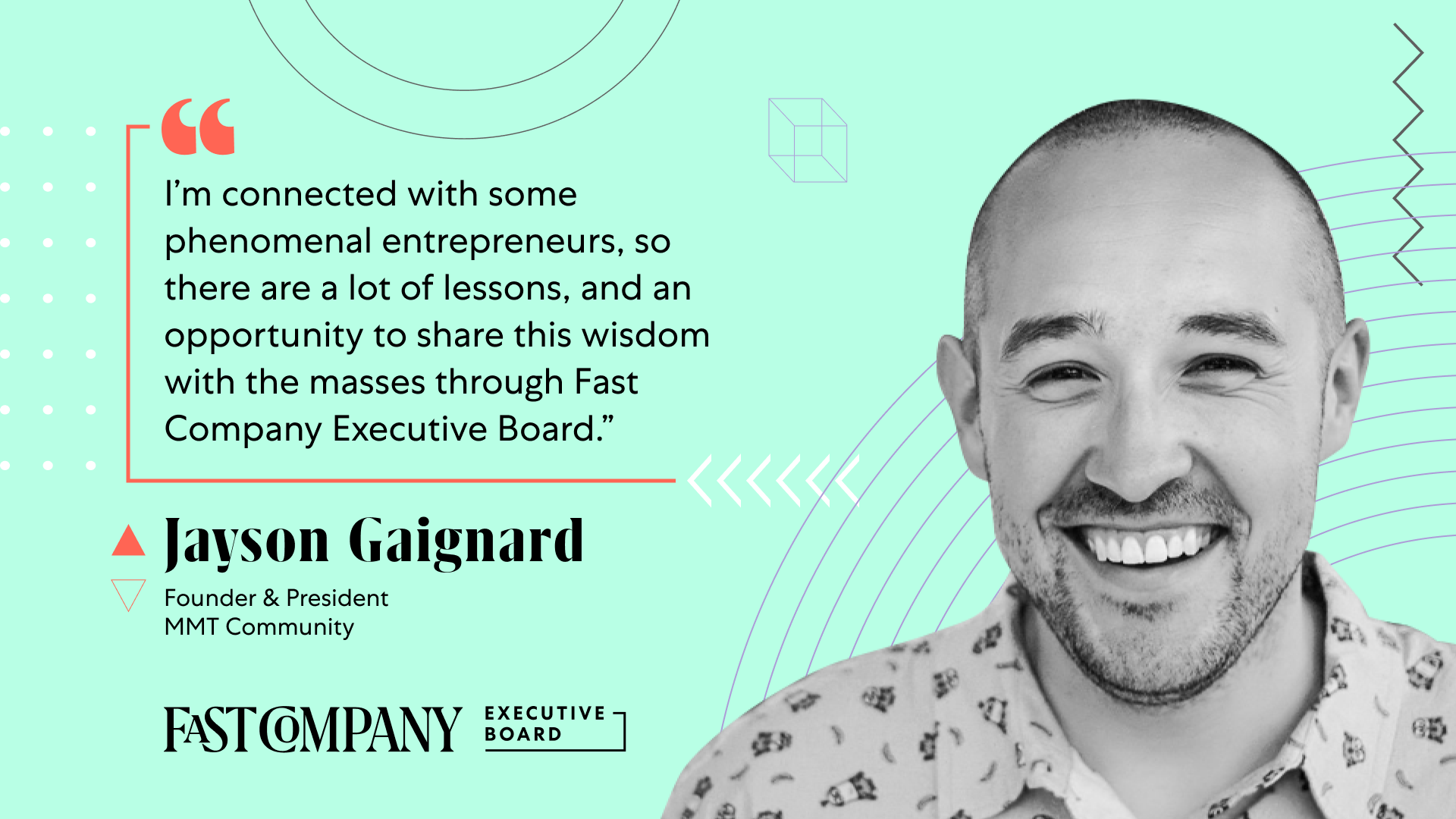 Jayson Gaignard had lost his business and was a quarter million dollars in debt when he discovered his true calling. It was 2012 and he was in the process of shutting down what had been Canada’s third-largest ticket retailer. “I was earning 22 times the national average income, but I realized I was not 22 times happier than the average male,” says Gaignard. “I actually had kidney complications at the age of 23 because of the stress of a failed business partnership. So I realized that money and happiness scale very differently.” He didn’t even enjoy going to concerts and sporting events and began to fret that his business was not in alignment with his values. He wanted out.

He began scaling the business down to zero but along the way, his bank called in his loan and a merchant services provider put his company’s account on 100% reserve, effectively eliminating his cash flow overnight. “That wasn’t a result of any wrongdoing on our part,” Gaignard says. “They were trying to crack down on our industry, because there were a lot of companies that suffered from a lot of chargebacks and there was fraud. We got wrapped into that.” When the dust settled, there was no business and a lot of debt.

So Gaignard had nothing to lose when a friend offered him a ticket to attend a speaking event and workshop featuring business guru Seth Godin. “It turned out the theme of the workshop was the connection economy and how there's huge value connecting like-minded individuals,” recalls Gaignard. The message resonated with him — as an entrepreneur, he had often felt lonely and isolated. So on the flight home, he dreamed up an idea to host dinners with other entrepreneurs, simply to foster connection. He was so nervous before the first event that he seriously considered canceling it. But he pressed forward and the dinner was a huge success; people lingered and the conversation lasted four and a half hours. “I got clarity that connecting people and being in the presence of fascinating entrepreneurs was something I wanted to do in some capacity for the rest of my life,” Gaignard says.

Next, he took a big entrepreneurial risk. With $84,000 borrowed from a friend, he bought 4,000 copies of Tim Ferriss’s latest book, The 4-Hour Chef — a purchase that entitled him to an in-person speaking engagement by Ferriss. So Gaignard organized an event with Ferris and other speakers, hoping to break even with 150 attendees. “It was really a social capital play,” he says. But 4200 people applied for the event, and Gaignard knew he was onto something.

“I got clarity that connecting people and being in the presence of fascinating entrepreneurs was something I wanted to do in some capacity for the rest of my life.”

That first event, held in May 2013, turned out to be the genesis of  MMT Community, an invitation-only membership community of entrepreneurs. Gaignard continued to organize intimate events every year for his community, signing up speakers like Marc Ecko and Esther Perel to give 15-minute TED-like talks over two days. To keep the community exclusive, he required members to re-apply every year.

Over the past seven years, Gaignard estimates that he’s received nearly 20,000 applications for MMT. Early on, he discovered that entrepreneurs were applying for the in-person event months before the agenda or speakers were announced. “That’s when it was clear as day to me that people were coming for the community more than for the content,” says Gaignard. “We shifted the model to a really peer-to-peer driven experience and admission to MMT now includes a full calendar year of an online community so that we can foster those deep relationships and continue to support each other in our journeys.” He also started an MMT-related podcast called CommunityMade.

That online community turned out to be an important foundation for MMT’s current pivot. “The pandemic shook our industry to its core and forced us to really build the online offering,” says Gaignard. “We’re in the process of shifting the model and repositioning the branding.” Last year, MMT’s June 2020 in-person event was postponed to June 2021, and recently shifted again to June 2022. Gaignard offered to refund everyone’s $10,000 fee, but all attendees opted to sit tight for the next year. In the meantime, MMT will offer a growing number of online events for its members. “We are blessed by their loyalty,” Gaignard says. “It’s just a beautiful community of fascinating, brilliant entrepreneurs.”