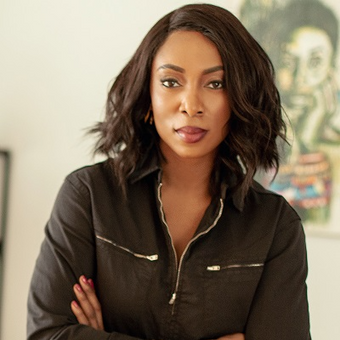 Jessica O. Matthews is the Founder & CEO of Uncharted Power, an award-winning, sustainable infrastructure company that transforms the ground beneath us into an industrial IoT platform for streamlining the integration, deployment, and management of critical infrastructures like power lines, broadband, sidewalks, and water pipes. Jessica’s career started at the age of 19 with her invention of the SOCCKET, an energy-generating soccer ball. At the age of 22, Jessica founded Uncharted Power as a power solutions company before expanding to integrated infrastructure solutions. Jessica’s success in entrepreneurship led to a White House invitation from President Barack Obama to represent small companies for the signing of the America Invents Act in 2012. In 2016, she raised what was at the time the largest Series A round ever raised by a black female founder in history and was selected to ring the NASDAQ opening ceremony bell, representing all Forbes 30 Under 30 alumni. Jessica’s research and career center around the intersection of disruptive technology, renewable energy, human behavior, and the psychology of self-actualization. A dual citizen of Nigeria & the United States Jessica has a degree in Psychology and Economics from Harvard University, an MBA from Harvard Business School, and is listed on over 12 patents and patents pending. Her list of accolades includes Fortune’s Most Promising Women Entrepreneurs, Forbes 30 Under 30, Inc. Magazine 30 Under 30, and Harvard University Scientist of the Year.

Founded in May 2011, Uncharted Power creates solutions that enable economies of scale to deploy and manage smart, sustainable cities. Uncharted Power first began as Uncharted Play, a social enterprise grounded in play and the happiness of life that would show the world how play could be a tangible tool for inspiring social invention. Through her work on the project, Jessica quickly realized that the world of play and motion was truly uncharted territory when addressing fundamental issues facing society tangibly. Jessica knew that an enterprise grounded in sustainable, realistic solutions for empowerment had real value. The company has since evolved to pioneering innovations within the sustainable infrastructure field. Our serviceable modular pavers are being designed to reimagine the built environment for Power and smart city infrastructure in a way that allows for interoperability and easier deployment upgradability. When you make infrastructure more convenient, you allow for a higher adoption rate due to lower costs and faster deployment. Today, you can find Uncharted Power working hard to fulfill the dream of creating universal access to sustainable infrastructure.