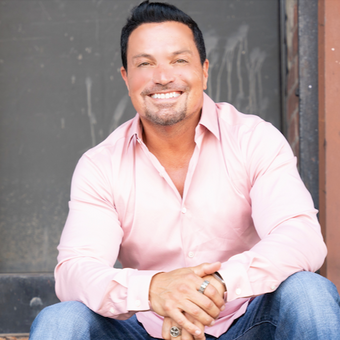 Richard “RB” Botto has created the online platform and marketplace designed to democratize the entertainment industry. By leveling the playing field for all film, television and digital content creators and professionals worldwide, Stage 32 provides networking and training opportunities as well as direct access beyond the gatekeepers. Launched in 2011, the Stage 32 community has grown to over 750,000 entertainment creatives and professionals worldwide. In addition, Stage 32 has curated the world's largest educational library with over 1500 hours of webinars and classes designed to help all film, television and digital content creators and pros hone their craft and navigate the industry. RB is also a producer whose films have played at dozens of festivals including a Sundance-award-winning feature. He is the Executive Producer on projects with Gidden Media and National Lampoon. Through Stage 32 he has helped incubate Chick Fight, starring Malin Akerman and Alec Baldwin, produced by Yale Productions and Ramo Law, and 10-31, produced by Eli Roth and Orion Pictures. As a writer, RB works on active writing assignments and has two features and a TV pilot in development. As an actor, his latest film On the Corner of Ego and Desire premiered at the Raindance Film Festival. Additionally, RB’s #1 best-selling book Crowdsourcing For Filmmakers: Indie Film and the Power of the Crowd, was published by Routledge under the American Film Market Presents banner, is available on Amazon and Audible, where it has garnered over 100 5-star reviews. (More here: https://amzn.to/2Ov3rgC) RB has been a keynote speaker and panelist all over the world at such festivals and conferences as Cannes, AFM, Tribeca, Sundance, Raindance, Hamburg, SXSW, Cinequest, Austin, ITVFest, Portugal FEST, Trinidad and Tobago and Winston Baker. He has also taught at institutions such as Harvard, USC and Columbia University on the subjects of filmmaking, producing, film finance, screenwriting, social media, crowdfunding, crowdsourcing, entrepreneurship and business.

The best content in the world won't have a positive impact on your audience—or your bottom line—if nobody sees it.

15 ways leaders can diagnose the reasons for rapid turnover

If you’re seeing high rates of resignation, these strategies can help you identify the reasons why.

Don't let your company's departments get cut off from each other and stop communicating about and progressing toward shared goals.

The leaders of even the leanest startup teams can usually find ways to cut down their work hours and find a better balance for long-term success.

14 low-cost ways to get good publicity for your business

Don't let a limited budget stop you from promoting your new business.

When it comes to getting the word out about your business, your own online reputation can be a boon—if you manage it carefully.

Leading a remote team can be challenging, but with the right strategies, you can keep your team aligned and productive no matter where they’re located.

Stage 32 is a global online platform connecting and educating film, television and new media content creatives and professionals. With a membership base of over 750,000, a library of over 1200 hours of original education programming, and a network of over 500 industry professionals who serve as mentors to the community, Stage 32 is recognized industrywide as a company disruptor leading the charge in the convergence of entertainment and tech. Stage 32’s global partners include the American Film Market, The Cannes Film Festival Marche du Film, as well as dozens of festivals, film commissions and film and television organizations around the world. Since 2011, Stage 32 has served as an incubator for discovering new talent and hundreds of film, television, and new media projects, which have gone on to premiere at all major festivals and be distributed by network, cable and streaming platforms. In 2020, Stage 32 introduced Stage 32 Screenings, an online portal which screens films, short films, TV shows and web series displaced by film festival cancellations by screening them online to sales agents, distributors, managers, agents and other executives and decision makers. To Join: www.stage32.com