Fast Company Executive Board is a Credibility Builder for Steve Dion 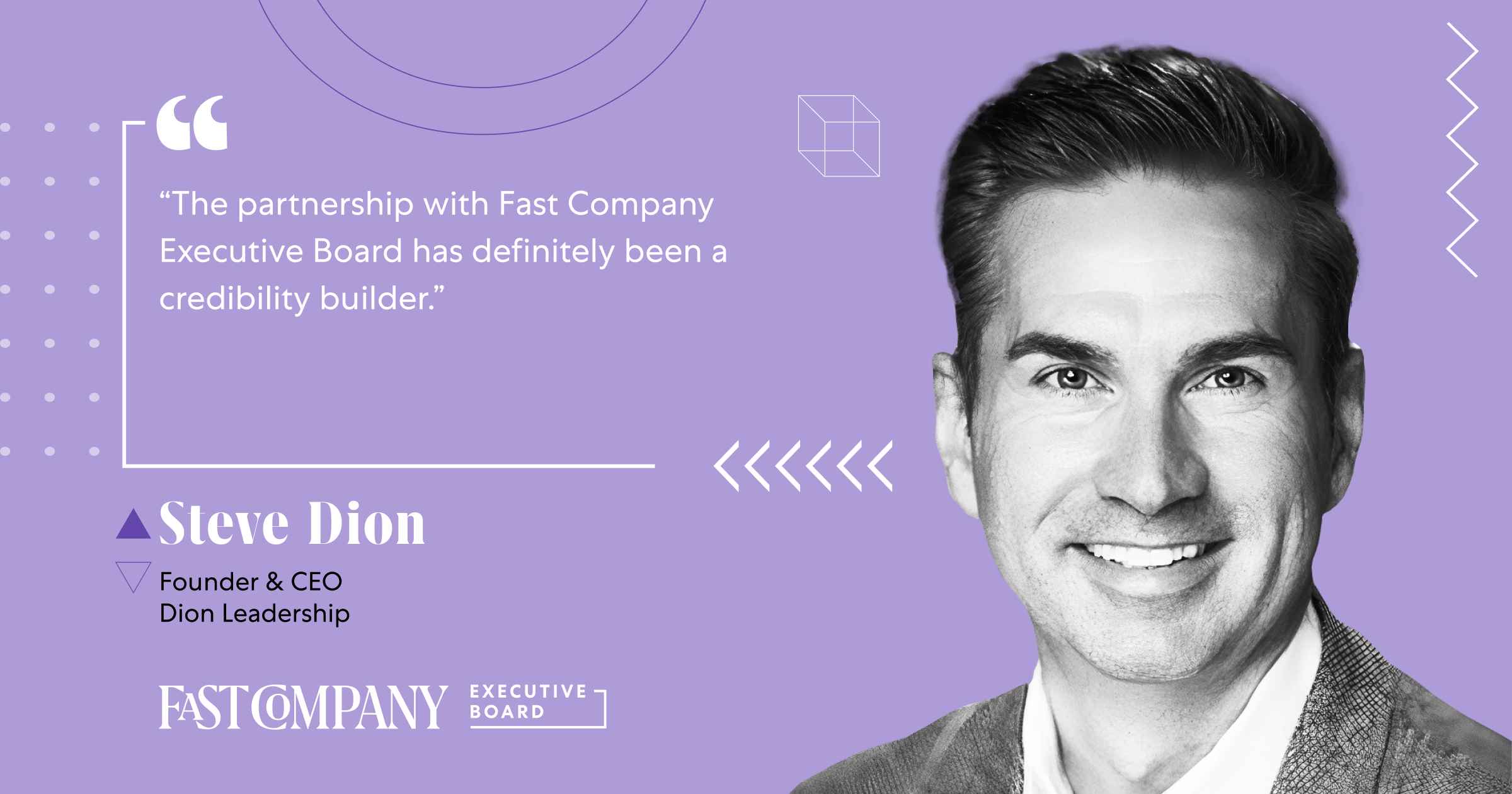 Steve Dion spent 25 years working his way up what he calls “the HR food chain” before launching his own company so that he could focus on his true passion. “I was always more interested and passionate about the culture and leadership aspects of what makes businesses successful than on the annual planning process,” Dion says.

At his last corporate job, as chief of human resources for a financial services company, he was hired by a CEO whose goal was to land the company on a major media brand’s “top companies to work for” list. That kind of distinction isn’t earned overnight, and Dion spent the better part of seven years going to conferences, rubbing elbows with company leaders known for creating great workplaces, and parsing out what made them stand out from the pack. To Dion’s great satisfaction, the company did finally make the list, albeit a couple of years after he left the firm.

Dion left the corporate world in 2008 to start a leadership coaching and organizational development firm with a partner. But after twelve years in business, the two realized they had different visions for the company and they dissolved the partnership. “I wanted a higher growth business, not a lifestyle business,” Dion says. “And I saw us needing to evolve to do things like virtual training delivery instead of in the classroom.” So he relaunched with his existing stable of clients in the beginning of 2020, and christened his new firm Dion Leadership.

At his first company, Dion had a full roster of large global healthcare and manufacturing clients. Through his new firm, he planned to offer them a more sophisticated set of tools to enhance their leadership capabilities and to build healthy organizational cultures.  He would  include individual coaching, group coaching, executive team development, high-end leadership programs, and organizational development consulting.  “A lot of our products or solutions are like mini-MBA or leadership programs that might take 12 high-potential people through a year-long journey,” he says. “That involves a lot of moving parts — it’s not just a one-day communication training class.” His clients include companies such as Trinity Health, Google, AAA Life Insurance, and a variety of tier one auto suppliers (Dion is based in Detroit).

“[Fast Company Executive Board] is expanding my circle of influence and opening up other doors to provide more thought leadership.”

As a former HR professional, Dion says he’s well aware of the challenges that HR directors face; that perspective helps him to better understand and communicate with his clients. “I’m not trying to grow the business on the HR side,” he says. “We don’t do policy books or recruiting strategies, but I can tell them, ‘I’ve been in your shoes.’ If they want a leadership program but just don’t have the bandwidth, we’ve built a whole delivery system that makes it easy for them to say yes, and we take it from there.”

Before the onset of the pandemic, Dion had already been thinking about offering virtual programs to grow his business. By the beginning of 2020, clients who had resisted those offerings were eager to sign on. “It went from almost 100% in person prior to my new business to 100% virtual in 2020 and 2021,” Dion says. “Now, I think our sweet spot program is a hybrid — a blend of in person and some virtual delivery.” By adding Zoom offerings, he’s been able to create more sustainable programs that are more effective because they spark new habit formation and behavior change over time.

To deliver group and individual programs, Dion draws upon a stable of 60 coaches who come from a broad range of industries. “I think one of our secret causes is that I’m always looking for the most accomplished, practical coaches,” Dion says. Coaching skills, which can be taught, are less important than professional achievement and proven success at work.

“The partnership with Fast Company Executive Board has definitely been a credibility builder,” says Dion. “To be a thought leader contributor is very surreal to me.” A recent article he wrote on premature promotions caught the eye of a producer of The Wall Street Journal’s podcast, As We Work, and resulted in an interview with Dion for the show. “That would not have happened without the article,” Dion says. “It’s expanding my circle of influence and opening up other doors to provide more thought leadership." He also believes that his Fast Company Executive Board membership has contributed to a 275% increase in monthly followers of his company website.