For Esther Kestenbaum Prozan, Fast Company Executive Board is a Valuable Knowledge-Sharing Platform 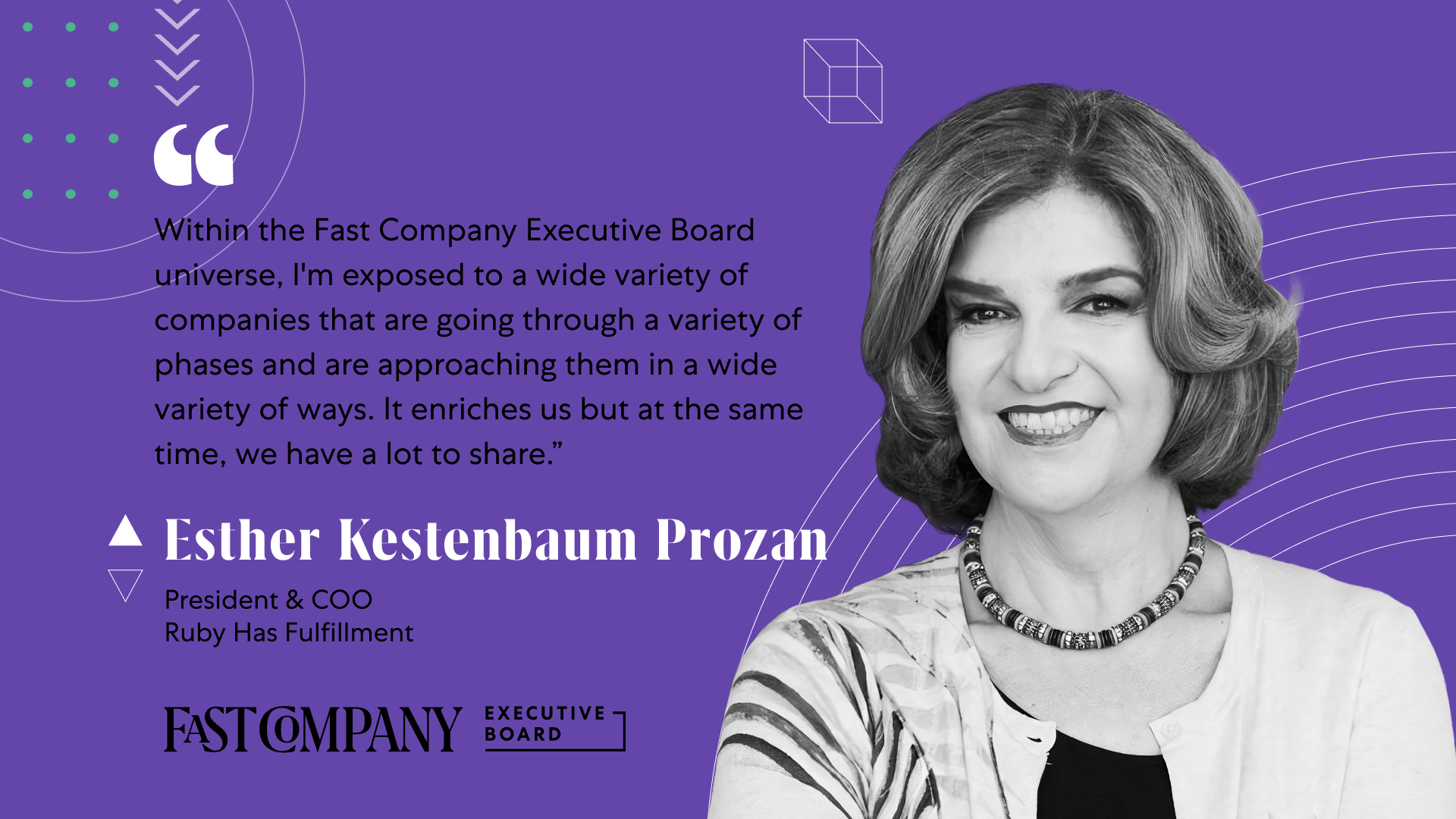 For most of her career, Esther Kestenbaum Prozan has worked in a sector of the e-commerce industry that is invisible to consumers, but critically important to the companies they patronize. As president and COO of Ruby Has Fulfillment, it’s Prozan’s job to make sure that after a consumer makes an online purchase, the goods get delivered in a way that’s consistent with the seller’s brand identity. “We work with hundreds of direct-to-consumer (DTC) e-commerce companies,” says Prozan. “Typically, they don’t do their own fulfillment, they use a third party logistics provider.” Ruby Has Fulfillment is a leading e-commerce fulfillment provider focused on DTC brands, such as Brooklinen and Thinx. The company’s clients are “definitely entrepreneurial companies,” says Prozen. “Some started with us when they were tiny and have become absolutely enormous.”

Prozan has been involved in e-commerce for more than two decades and has witnessed its dramatic evolution. While working for an Israeli e-commerce enablement company in the late 90s, she experienced the industry’s first boom and its subsequent bust. “It was a very, very interesting ride,” she says. “It was the beginning of not just e-commerce but digital commerce.” In addition to online purchasing, that includes buying online and picking up in-store, driving consumer behavior inside of stores, and IoT. “My own role has been on the business development and marketing sides of e-commerce enablement companies,” she says.

One of the biggest changes in the industry, Prozan says, has been the democratization of direct to consumer capabilities, once only available to large companies such The Gap. “Today, you have platforms such as Shopify and anyone can do it,” she says. “It’s cheap, it’s easy, and it’s highly intuitive. If you've got a great product, you don't need a standing army of developers to get it out with full rich functionality into the world and market it. And that’s an incredible innovation.” But most DTC companies, as soon as they begin to grow, want to focus on products, marketing, and messaging, and they don’t want to worry about the often complex logistics of getting products into the hands of consumers. Third party logistics providers such as Ruby Has Fulfillment see the DTC orders when they are placed on a company’s website, house the goods in their warehouses, then pick, pack and ship them. “Our job is to fulfill the client's brand promises,” Prozan says.

"[Expert Panels] is like an open source platform for the common good."

While COVID helped accelerate the company’s growth, Prozan notes that Ruby Has Fulfillment was already on a high growth trajectory before the pandemic. While the industry is highly commoditized and transactional, her company differentiates itself from competitors through its consultative relationships with customers. “Fulfillment is at the epicenter of e-commerce,” Prozan says. “We’re going to be that trusted advisor that wants to understand everything about your business, set you up for success, and stay ahead of your needs. We’ve taken the stance of what we think of as radical generosity.” That may mean introducing customers to vendors outside of the fulfillment function that could help them grow, participating on leadership panels with other industry leaders such as Microsoft and Silicon Valley Bank, and offering advice on all aspects of e-commerce. “If they're looking for insight on how to move the ball forward for their company, we're there,” says Prozan. “We have an entire ecosystem of 120 partners to bring to bear to whatever you're looking at doing. And eventually, when you have a need, you may or may or may not remember that we helped you out.”

During the pandemic, many companies in Prozan’s industry were closed down because of COVID outbreaks. “We started very early to get our arms around it,” she says. The company has 700-800 employees and half a million square feet of warehouse space in six locations. PPE was delivered to all facilities, social distancing and deep cleaning was mandated, travel between warehouses was restricted, and the company’s paid medical leave policy was fully communicated to employees. Lunch was delivered and some wages were even increased. “That helped us stay open,” says Prozan. The result: Ruby Has Fulfillment won a 2021 Bronze Stevie Award for “most valuable corporate response” during COVID-19.

Her membership in Fast Company Executive Board “relates directly to us viewing ourselves as part of a larger community, as part of an ecosystem,” says Prozan. Through working with hundreds of consumer brands, she’s become aware of a variety of best practices that she’s enthusiastic about sharing with others. “Within the Fast Company Executive Board universe, I'm exposed to a wide variety of companies that are going through a variety of phases and are approaching them in a wide variety of ways,” she says. “It enriches us, but at the same time, we have a lot to share.” She finds that Expert Panels and long-form articles are an effective and time-efficient way to participate in knowledge sharing. “It’s like an open source platform for the common good,” she says.