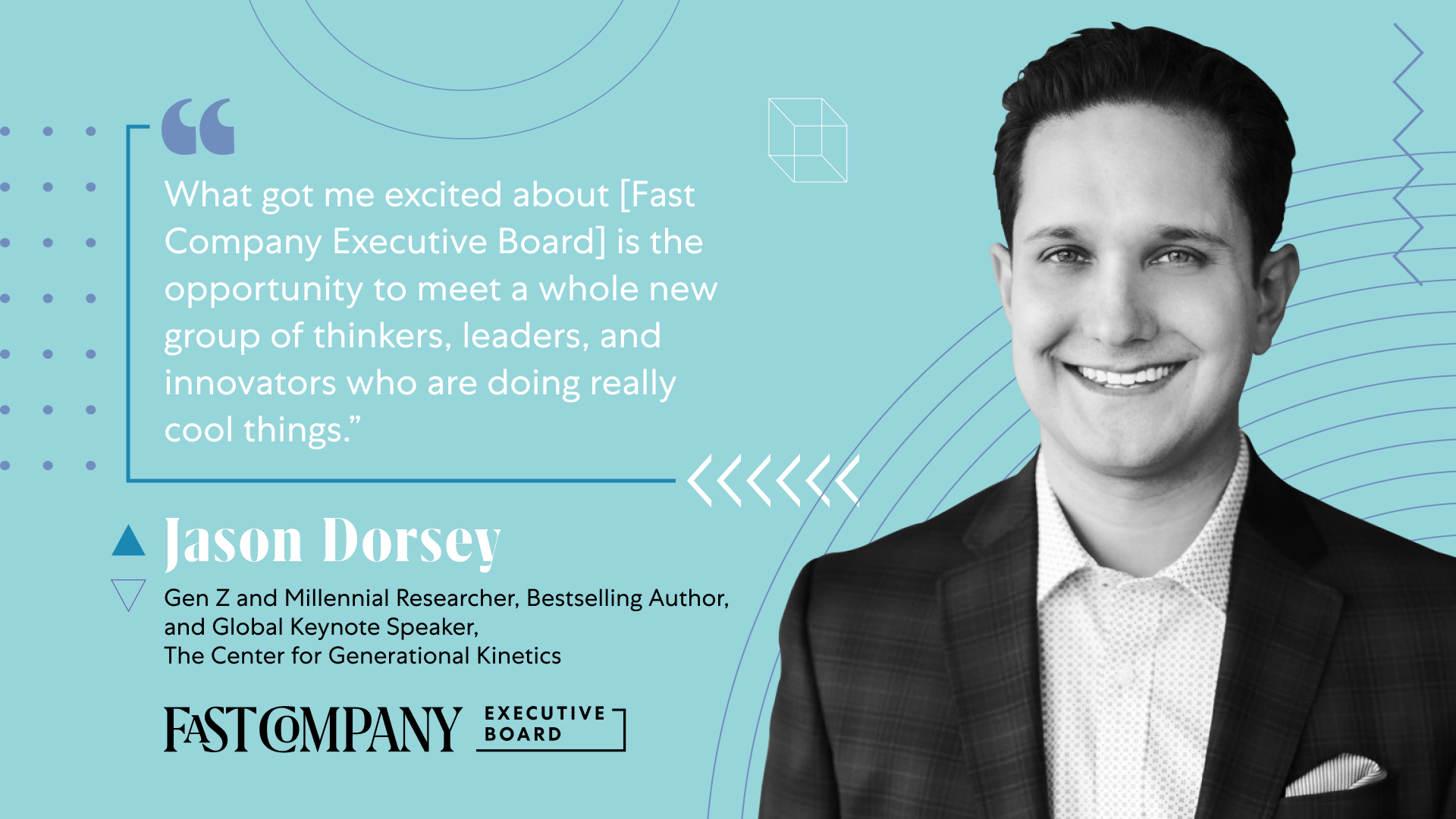 Jason Dorsey wrote his first book, How To Graduate to Your Perfect Job, when he was an 18-year-old junior at University of Texas at Austin, $50,000 in debt, and sleeping on a friend’s floor. “I had this real desire to help my generation,” Dorsey says. He’s talking about millennials, who were then much-maligned as entitled job-hoppers. The book attracted some attention from the press, and that led to some speaking gigs. “Two years later, I was speaking to 5,000 people in an arena with Barbara Bush,” he recalls. The Today Show came knocking at his door, as did 60 Minutes. “They were doing an episode on millennials and it was me and Morley Safer,” recalls Dorsey. “It was a really big deal.” But not quite in the way he expected.

Corporate leaders started contacting him, complaining bitterly about the millennials they had hired. Their pants were falling down, their moms called the office, they required constant praise. Dorsey listened patiently and asked one CEO if he could take a look at the company’s employment data. “The data didn’t match what the CEO had said — that millennials weren’t good workers and weren’t loyal,” Dorsey recalls. “And what we found is that the retention rate with his millennial employees was actually as high as the other generations.” So what was going on? Dorsey reckoned that the CEO had become fixated on one or two millennials who fit the generational stereotype, and then judged all of their peers accordingly.

In that misperception, Dorsey and his wife, Denise Villa, saw an opportunity, and they co-founded The Center for Generational Kinetics. The company conducts original research that separates myth from truth about generations so that leaders can make better decisions not only about attracting and retaining employees, but also about marketing to specific customer populations. “We’re focused on behavioral insights,” says Dorsey.

Over the past ten years, CGK has led more than 65 generational research studies on four continents and worked with over 700 clients, many of them large, iconic brands. “We just really love what we do, which is getting past the memes and the headlines to what actually is going on with generations, so people could be better leaders, marketers, employers, and community members,” he says. In addition to custom research, Dorsey and Villa also do public speaking and serve as advisors to large companies, private equity and venture capital firms, and startups in a variety of industries, including e-learning, fintech, and SaaS.

“Being able to get in on the ground floor of such an exciting community, tied to a brand that I have deep respect for, really gets me excited to be able to contribute, meet new people, and be a part of the great conversations that I know are going to come.”

While Dorsey started out helping clients understand his own generation, he has expanded his focus to all the generations currently in the workforce — Gen Z, millennials, Gen X, and baby boomers. Each group is saddled with its own set of misperceptions, which Dorsey and Villa strive to debunk. For instance:

Every generation, says Dorsey, has its strengths and brings value to the workplace or the marketplace. CGK’s goal is not to put those generations in boxes, but rather to offer predictive clues that enable better connection and trust-building.

“What got me excited about [Fast Company Executive Board] is the opportunity to meet a whole new group of thinkers, leaders, and innovators who are doing really cool things,” says Dorsey. He knows how important it can be for leaders to build new social circles, friendships, and business relationships that are outside of one’s industry. “Being able to get in on the ground floor of such an exciting community, tied to a brand that I have deep respect for, really gets me excited to be able to contribute, meet new people, and be a part of the great conversations that I know are going to come.”